Longer hitters will be able to drive up the rise and earn a clear view of the surface of the green as well as the flagstick. There is now a lot of short grass to the left and those who shy away from the wasteland on the right will face a longer shot, but one from a good angle into a green built on an orientation from left to right. The deep swale short of the green protects the right half of the green – the narrowest and most difficult part of the green to access – and it will take a fine shot to get close to the hole. The chip from the hollow can be played with a lofted club, or one with a straighter face, but the shot will have to deal with the unpredictability of running the ball up the kikuyu bank.

* This is a wide fairway – an un-missable one if you go left. The hardest shot for any golfer is the long bunker shot. Decide if you can reach the short bunkers, either left or right, and take a club that won’t reach them left. If the pin is left, don’t miss it left and if the pin is in the far right, play the second shot as far left as you can so you can pitch down the green. 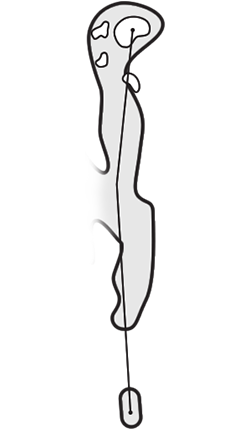 < PREVIOUS HOLE BACK TO COURSE OVERVIEW NEXT HOLE >